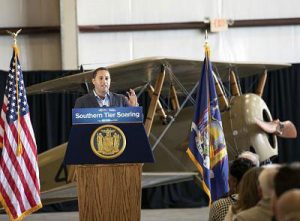 The project, set for completion in late 2019, will expand the terminal nearly 50 percent, the office of Gov. Andrew Cuomo said in a news release.

The Upstate Airport Economic Development and Revitalization Competition provided $14.2 million in state funding for the $24.7 million project. The remaining funding includes $10.2 million from the federal government and $260,000 from Tompkins County, per Cuomo’s office.

The project will include the addition of a new U.S. Customs and Border Protection building.

Additional improvements will include new passenger amenities, such as “more modern and spacious” waiting areas equipped with charging stations, and post-security food and beverage options.

“The new Ithaca Tompkins International Airport will be a vital transportation hub connecting visitors from around the globe with destinations throughout the Southern Tier,” Cuomo contended in the release. “This transformational project will provide the region with a 21st century international gateway that will not only enhance the passenger travel experience, but also encourage new investments in Ithaca and beyond to keep the Southern Tier Soaring.”

The number of passengers has increased nearly 25 percent in the last two years, a “trend that is expected to continue with the airport’s modernization,” Cuomo’s office said.

As part of a separate project, the New York State Department of Transportation (NYSDOT) will relocate its 7.6-acre maintenance facility from its current location on Cayuga Inlet in Ithaca to the airport in 2020. The disposition of the current parcel through public auction will free up “prime” waterfront property for redevelopment, Cuomo’s office contends.

NYSDOT maintenance staff will work from the new residency once construction is complete. The project is the result of collaboration between the state, the FAA, Tompkins County and the Town of Lansing.